The Earl of Moray 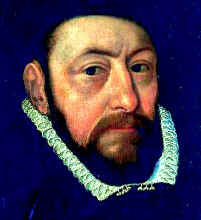 Mary's father, James V, was married to Mary of Guise and between them they had a daughter, Mary Queen of Scots. But before he married, James had an affair with Lady Margaret Douglas who gave him a son. The baby, born in 1531, was James Stewart, Mary's older half-brother. He was brought up a Protestant and once more religion became a problem in Scotland.

Mary was Catholic. Her older brother was not. James Stewart got into arguments with Mary of Guise, Mary's mother, also a Catholic. He led the Protestant Lords against her.

When she died, however, and his sister Mary came back from France to be Queen, James supported her. She in turn gave him great honours. She made her brother Earl of Moray and Earl of Mar. But these good relations didn't last long. They fell out over his attitude to John Knox, the great Protestant minister. James liked him, Mary hated him.

James was also very much against Mary's marriage to Darnley. In 1565, he tried to stir up the people of Edinburgh against his sister. She was forced to go into battle against him and drove him out of Scotland. After a year, she forgave him and allowed him back. This proved a great mistake.

The two armies of brother and sister went into battle when Mary came back with her own army to try to regain her throne. Her brother defeated her in Glasgow, at the Battle of Langside in 1568, and it was her turn to flee to England.

After Mary was made to give up the throne, her brother took power and became the Regent (guardian) for her baby son, James VI. Uncle James made sure Mary's son was brought up as a Protestant.

Scotland was divided for years afterwards. Many felt that Mary was the rightful ruler of Scotland. Others felt that it was better for her Protestant son, James, to have the crown.

Mary's brother, James, supported her baby son. He was determined to turn Scotland into a Protestant country and to try to keep good contacts with England.

However, he had many enemies and was assassinated in Linlithgow, the place where he was born, on January 21st 1570.

Back to the Timeline