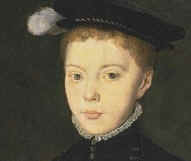 Darnley was born in December 1545, and died in February 1567. He was the father of James VI of Scotland (and 1st, of Great Britain). Between them, his mother and his father had claims to the English crown and to the throne of Scotland.

His mother wanted him to marry Mary, Queen of Scots, so that he might become King. Mary and Darnley got to know one another in France. In 1565 Darnley went to Scotland. Mary wished to make him her husband. Elizabeth, Queen of England, was against the marriage, because she thought it was dangerous to the friendship between the two countries.

However the marriage went ahead and was a Roman Catholic service. This meant that it was offensive to the Scottish Church and John Knox, and to various other people who had a claim to the Scottish throne.

At first, it seemed to many people that Darnley was a nice person, but underneath he was an unpleasant, cruel and bossy man, and he was drunk a lot. Rizzio was Mary's secretary. Darnley had Rizzio murdered because Darnley thought that Mary was having an affair with Rizzio.

Darnley and Mary had a son, in 1566, who was later James VI (of Scotland) and 1st (of England). They lived for a while in Kirk 'O Field near Edinburgh and, while Mary was away from the house, it was blown up and the body of Darnley, who apparently had been strangled, was found in a garden nearby.

A few months later, Mary, Darnley's widow, married the 4th Earl of Bothwell who had brought about the murder of Darnley.