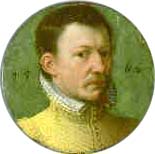 Born in 1535, James Hepburn became the Earl of Bothwell in 1556 when he was in his early 20s. He was a Protestant but took sides with Mary's mother, the Catholic Mary of Guise. After Mary of Guise died, Bothwell became a member of Mary Queen of Scots' Council.

He was accused of plotting to kidnap the Queen in 1562 and was put in prison in Edinburgh Castle. However, he escaped and went to France.

Things improved for him when Mary invited him to return to Scotland to help her get rid of her half-brother, the Earl of Moray. The Earl of Moray (James Stewart) was very unhappy about Mary marrying Darnley. With Bothwell's help, Mary had her half-brother driven out of Scotland. Mary Queen of Scots was so impressed with Bothwell and his support that she made him a very powerful nobleman in southern Scotland.

They were so close that when Mary's husband was murdered, people thought that Bothwell had done it. They were even more suspicious when Mary stepped in and helped Bothwell at his trial. She arranged for him to be freed and, three months later, she married him! It looked very much as if they had planned this all along.

Both Catholic and Protestant nobles disliked Bothwell. They were very unhappy with the Queen's new marriage to this man. So the Scottish Lords formed an army and went into battle against Mary and her new husband. At Carberry Hill (near Edinburgh), Mary was forced to surrender. This battle took place on 15th June 1567.

Mary agreed to abandon her new husband, and he was allowed to escape. He went to Denmark and lived there alone for many years. In 1570 Mary dissolved their marriage. Alone in Denmark, Bothwell lost his mind, became insane and died in 1578. He never returned to Scotland or saw Mary again.